Chris Giattina, the CEO of BLOX, has built a company around the idea of constructing medical facilities that can be easily adapted to changing needs, a concept he shared at HealthSpaces.

“BLOX created a building delivery method called "Design Manufacture Construct" (DMC) - simply, we are teaching a legion of architects how to leverage manufacturing productivity so that construction is simplified. When we can make construction simple, we approach our goal - to make buildings with twice the quality at twice the speed with twice the value - 2x2x2," Giattina said. "If we can do that, we'll make a difference."

“We’ve focused on healthcare construction because of the opportunity to create repeatable, standard solutions for serial builders of healthcare. Today, we are working with healthcare companies across the US.”

First, some background: around 2000, Honda asked Giattina to lead design and construction of a massive project in Alabama - they wanted the first phase opened nine months from that very first conversation. They made all of the company's resources available to him, and six weeks later they broke ground on a 1,000-acre site.

"By that sixth week it was abundantly clear that unlike the Japanese automotive industry, the American construction industry had failed to invest in the R&D that would allow them to deliver quality at speed,” Giattina said, “so all we had was brute-force. We finished, but it was painful and unsustainable. We knew we needed a better process.”

From that project, a group of architects, builders, and engineers got together and began to develop a framework to fix the issues of the industry. They defined their goal as 2x2x2 - they’d make twice the quality with twice the speed for twice the value. "If we could do that, we thought, we would be valuable in a world of clutter," he said.

Giattina presented a case study showing how the nation’s largest for-profit hospital company used DMC to standardize its major building components across its diverse and complex portfolio. The outcome was a set of standard modules that could be used on all projects across the US. It was not just a design standard, but a complex manufacturable standard that had supply chain intelligence combined with regulatory and cost controls built-in. The cost per part dropped, but the overall cost of the building was unchanged. The early promise of cost reduction at the part level led them to focus on how to make that promise enure to the overall benefit of a lower building cost - Step Two.

In DMC step one, BLOX was making individual modules that worked with traditional construction. In step two, they wanted to take the building in “chunks” - large structural building components that fit together in the field like giant legos to make buildings.

The “legos” are based on a structural 15x15x60' “Uber module” - a universal structural steel frame that can be stacked 30 stories high. That universal frame can contain a lot of complexity and any number of different modules—X-Ray, CT, patient rooms, Central energy plant, Trauma, labs, cafeterias— all fitting into the Uber Module. 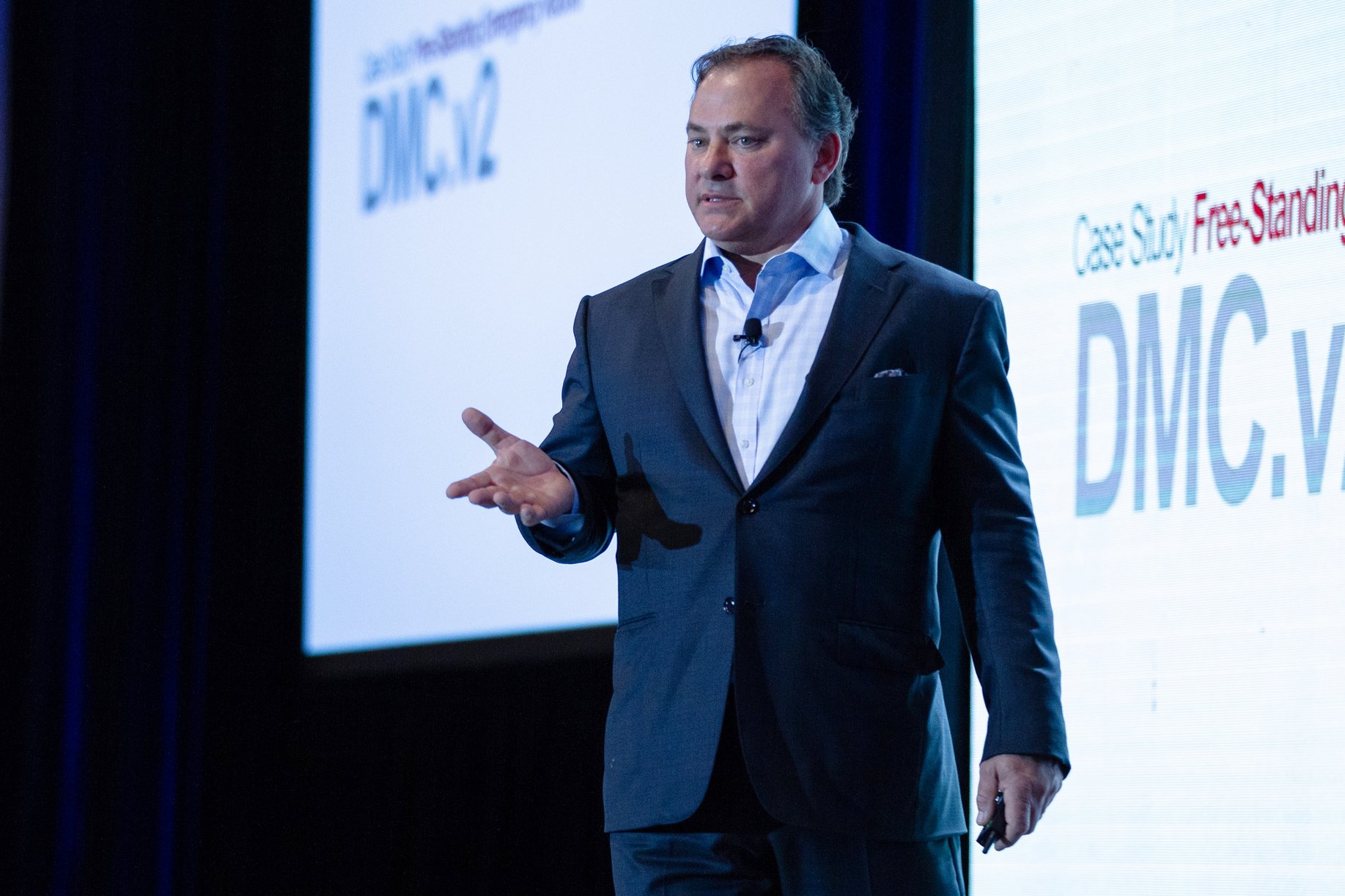 In addition to the Uber Modules, BLOX used technology to skip some of the normal industry processes and was able to go from building information model straight to building fabrication. This improvement came from using a cloud-based platform called WEVR. The software takes raw materials and organizes them with manufacturing and regulatory constraints, then finds the best-in-class manufacturers and makes standard products which are distributed through a web portal. This process utilizes technology that previously hadn't been used by the industry and it has helped scale DMC so that costs can drop.

Throughout step two, Giattina tracked the improvements to the ideas of DMC across a fifteen project case study of Free-Standing Emergency Departments. After completing the first five projects, BLOX saw significant gains in design and manufacturing from project one to five: design time went from over a year to 45 days; manufacturing time went from 100 days to 25 days. Importantly, construction time did not improve from project one to project five (even though the building was being delivered at twice the speed of traditional construction).

Because construction was still the constraint, other items were subordinated to allow a solution to construction to be the focus. BLOX took a two-pronged approach: they used design to take more complexity out of the field; and they worked to improve their construction techniques on those conditions that could never be removed from the field. In a continuous improvement cycle, BLOX repeats this process in five project groups while measuring the results before making the next set of improvements.

"When we finally get to 2x2x2 at scale, we will have unraveled the Gordian knot of higher quality at a faster rate and a lower cost," Giattina said, “We aren’t there yet, but we are gaining on it.”