How will Blockchain Impact Facilities Management?

What exactly is Blockchain, and why is everyone buzzing about it? 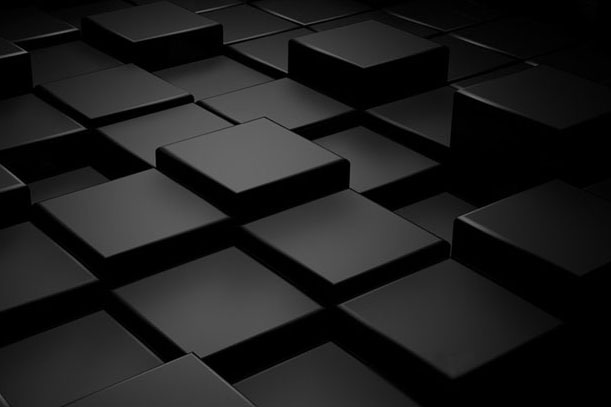 The hype over Blockchain technology’s potential in the healthcare world is growing at a rapid-fire pace, yet the majority of people have more questions than answers. What exactly is Blockchain, and why is everyone buzzing about it?

Between a recent spike in highly-publicized ransomware cyberattacks and the inherent vulnerability of health data, the concept of a immutable record of digital events is being hailed as “the magic bullet” the industry so desperately needs. An encrypted way of distributing, sharing and storing data seems like the perfect solution for countless inefficiencies in the current healthcare landscape. The beauty of Blockchain tech is also that it’s decentralized, which reduces wasted time as there’s no central authority needed to approve transactions.

To help us unpack the concept and its implications for healthcare facilities, we chatted with futurist and innovation expert Ron Galloway. Galloway first shared with us some telling statistics from a recent IBM report, which revealed that:

Here’s what else we learned about the fascinating technology poised to disrupt the industry...

Explain Blockchain to me as if I'm a fifth-grader.

The Blockchain can be compared to a giant Excel spreadsheet that millions of people share at the same time and agree that it’s valid. Think of it as a trusted shared ledger. If there’s a certain blockchain address, I’d have a certain amount of bitcoin there...but there’s no reason I couldn’t put a real estate title there, an electronic medical record, or a facility’s inventory. Up until now it’s mostly been explored for financial stuff. The possibilities are all there for MRI’s, X-ray's, HVAC, systems monitoring, and so much more.

So essentially it’s a shared database with no central ownership. It’s the trust that makes it work, because both ends agree that the correct values are in the correct “cells”, and the information is updated automatically on each computer on the network. You can see everything that goes on and all parties maintain a full copy of the transactions.

It’s up to you. It’s like choosing to say “Eagles” or “the Eagles.” The ironic thing is no one knows who invented the Blockchain-- it’s allegedly a genius researcher who wants anonymity. 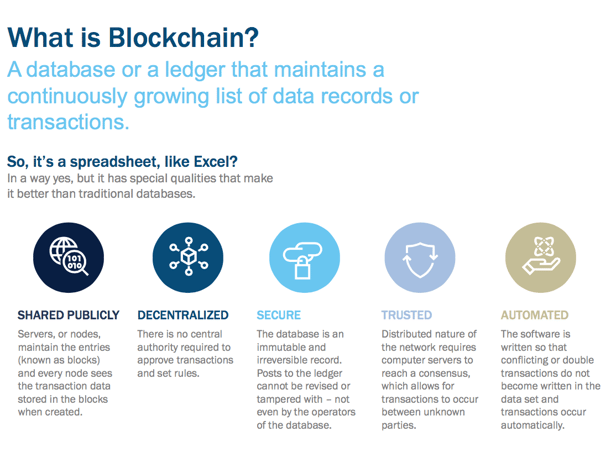 Caption: Infographic on the basics of blockchain from Autonomous Research.

How secure is it?

Here's why it’s so secure: everything is hashed beyond belief with 128-bit encryptions. Let’s say a hospital writes a prescription and a pharmacy picks up that prescription and it’s in cell c3--it’s a giant series of hashed numbers that no one understands, so someone has to use their computer to de-hash that. Its hack-proof because both sides have to agree on a cell; for example cell c3 might say 14, and that cell remains locked and immutable once we grow. The blockchain can grow and grow, but c3 will always be 14, unless one of us changes it, and then we both have to agree on the change.

So there’s no one in, say, Russia who can hack into this information?

Not yet! The best analogy is a Google spreadsheet where you and I are both on at the same time and agree, “Yup, that value is 14.” No one can get in because you both have a private key.

If you’re ahead of the curve on this, you can do all sorts of fun stuff with it. It’s so new and un-understandable, everyone wants to know what it is right now but can’t quite get it. Everyone’s talking about it now, Forbes just came out with an article on how it will be a game-changer in healthcare.

How will blockchain impact healthcare?

Blockchain will have a profound impact, especially with electronic medical records. It’ll finally solve the incurable problem of interoperability between EMR’s. Here in Augusta where I am, about 15 EMRs are being used and none of them cantalk to each other. When a patient gets transferred, everything must be re-entered all over again from the start.

Second, it will be essential in pharmaceutical inventory in hospitals, in the tracing and drug supply chain. For example, a doctor wants to be able to trust that a pharmacy has given you the correct amount of medicine, and blockchain allows both sides to agree on the transaction.

Third, the data from personal health devices people are wearing will be integrated with your overall record for a longer historical record, with all of your health variables, that’s always updating itself. Wearables like the Apple watch will communicate with the blockchain so your doctor can then immediately pull up this data.

All data from the IoT, which will also profoundly impact healthcare facilities, will be stored here in this ledger--which is built on trust. 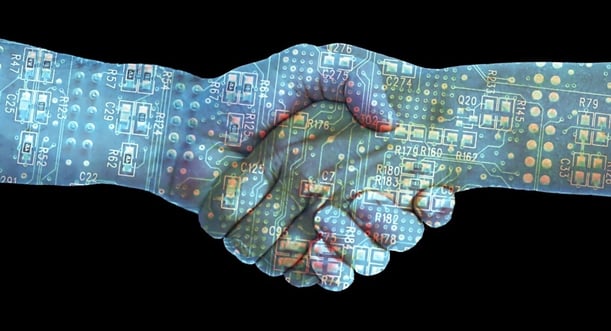 Where will blockchain impact real estate and facilities?

It will mostly impact facilities in terms of inventory management. In real estate, one of the simplest things it’s going to impact is real estate titles, as the title to the property will encrypt on a block. Title insurance companies will be disrupted... those guys will be gone, they won’t be needed with the title existing on blockchain. A lot of tech vendors that are cleaning up the mess of EMR’s will be gone. Blockchain is going to cause the further rise of tech professionals in healthcare.

All contracts will be done on blockchain. These “smart contracts” self-execute to update seamlessly, which all parties can trust since no one controls it. Payments could be settled as soon as concrete from a truck hits the site. Once the two people agree the contract is valid... boom, the payment will be released through a variety of payment systems. The easiest one to talk about is bitcoin, but there’s Visa, Mastercard, HCH (which is why the Fed is interested in it) as well.

Everyone worries about robotization. But somebody's gotta build the robot. Its for the good; I believe it enriches mankind. Look up the robotic brick layer on YouTube-- it can do a house in a day. The robot scoops up cement, lays it down, and never takes time off. The nature of work will fundamentally change as everything else is changing, and it’s very interesting.

Are you aware of any early adopters currently using blockchain?

Which jobs are most at risk of becoming obsolete because of blockchain?

Who pays for the blockchain?

Nobody, although many companies are trying to place themselves at the forefront of the technology. It’s a shared resource. It’s like asking who pays for the internet. All the internet is is just electricity flowing between routers, so no one pays for it.

So I guess the better question is, who will make money off blockchain?

Consultants, IBM, Price Waterhouse, and data warehousing geeks. Price Waterhouse and Deloitte are doing all kinds of  white papers on this, because no one understands Blockchain and it is going to be a consulting gravy train for a while. Go on Indeed.com and put in “blockchain,” see what kind of job postings come up. It’s a very interesting and telling way to research.

Is the blockchain really going to be disruptive... or is it all hype?

It is far from hype and will apply to almost every area of business, from healthcare to banking. The depository trust company (DTC) that holds your electronic stock and bond certificates is exploring it, so is the Fed. Your money and your life, the two things that are big deals to you, are going to exist on the blockchain.