Bob Feldbauer, System Vice President of Facilities at UC Health, should know: he's led several new-build hospital projects of over $1 billion from the US to the UAE.

Those two speeds, slow and slower, are simply not acceptable anymore, especially as the pandemic has taught us that projects can move faster. Feldbauer shared the high reliability organization principles he has adapted to enhance and improve standard project management processes to what he calls "mindful project management."

In the United States alone, $500 billion is spent in healthcare construction annually, and forty percent of those projects have some sort of issue in relation to schedules or budgets.

"Why is there an issue?" Feldbauer asked. "Just look at the model of what we do in healthcare construction and try to apply that to any other industry: We bring in teams that have never worked in that configuration together to do one-offs of these complicated structures that are supposed to last for 40 to 50 years."

To compare that to automotive manufacturing, he said, it would be equivalent to each individual building a new car themselves. "It's just an absurd model."

Large-scale hospital projects are inherently complex, and often bring in teams from all over the country, if not all over the world, that have never worked together in any capacity before. A complex project needs to be conducted as a symphony; today's large-scale hospital construction projects tend to look more like individual members of an orchestra all playing different pieces of music at the same time.

Project management research tends to focus on improvement through what Feldbauer calls "hard skills"—going through the project cycle, looking at forecasting, using information technology, utilizing new processes like Lead Design. But, he said, the problem isn't an issue with those hard skills; it is a lack of development in soft skills—things like awareness of cultural differences, the openness of communication, and being transparent.

In order to build those soft skills on his project teams, Feldbauer began extensively researching different models for building soft skills that he could adapt for his organization. The High Reliability Organization (HRO) model proved to be the best fit.

The Complex Construction Project as an HRO

Fundamental to applying the HRO model to a project is to look at the project as a temporary organization.

"Projects of any length of time really do meet the definition of being an organization in and of themselves," Feldbauer said. People from different organizations have to work together and develop their own culture, behaviors, and communication methods with each other.

"Mindfulness" has become a particularly popular concept in recent years in the wellness industry, but in the context of an HRO it refers to the ability to see past one's own biases and experiences and take a deeper-level look at what's really happening.

We are all vulnerable to mindlessness in our organizations, Feldbauer said, and it's not just cognitive biases—we're blinded to a new way of looking at things based on our past experiences, and we have a tendency to slip into "autopilot" mode.

The Principles of Mindfulness in an Organization

He outlined the five principles of mindfulness for organizations as they can be applied to complex construction projects.

1. Have a preoccupation with failure.

If, as an organization, you are more focused on looking for failures than on looking for successes, then you are more likely to catch failures early on. He compares it to diagnosing a disease early on, rather than delaying diagnosis and starting treatment after it has progressed. On a project, the longer something is done wrong, the more difficult it is going to be to correct in the future.

2. Be reluctant to simplify.

3. Have sensitivity to operations.

Having sensitivity to operations means having the ability to see the big picture, and actually seeing the reality of what's happening on the ground regardless of what your (or anyone else's) plans and intentions are. It also means regularly updating all project members on the progress and process so they can adjust their actions and anticipate problems at an earlier stage.

4. Be committed to resilience.

If there is one thing that is certain on these complex construction projects, it's that something will go wrong. Having the right team members to be able to respond efficiently and effectively together—that is, to be resilient—is critical.

5. Be willing to defer to expertise.

Deferring to expertise doesn't mean deferring to titles; it means deferring to the people with the most knowledge in a specific area, which they have because they are on the ground doing that work every single day. A lot more can be accomplished, and quickly addressed, if trusted, knowledgeable team members on the ground are empowered to make decisions to address issues before they even become issues.

Feldbauer has been leading projects with this "mindful project management" framework for eight years now. He introduces it from the very first steps of writing the project charter. 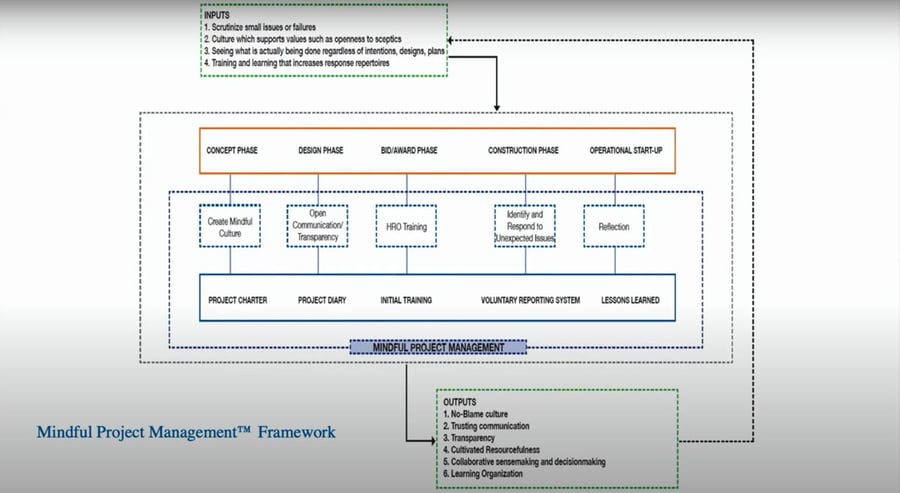 "When we do a project charter, we're saying, 'Here's the culture we're expecting you to play by,' so it's almost like setting up an IPD atmosphere without the legality and risk of having an IPD," he explained. "Right off the bat, we're saying if you're going to come on as part of our team and be with us for a while, here's what we expect of you."

Those expectations include having a no-blame culture, trusting communication, full transparency, cultivated resourcefulness, collaborative sense-making and decision-making, and acting as a learning organization.

Every contractor involved in the project goes through training on mindful project management from day one, and it is implemented into every phase of the project. There are project diaries that everyone has access to, extensive reporting for any kind of issues whether they caused harm or not, and a download of lessons learned.

But mindful project management is not a replacement for all of the hard project management tools and processes already in place. "All of that has to stay," Feldbauer said. "This is about what we can do to help develop those soft skills—teamwork and culture on project teams."

They've had a great response to this methodology, he said, referencing a recent successful project that prompted both the architect and the contractor to request they all work together again on the first phase of UC Health's master plan.

"They said, 'We had such a good team together, you've got to pick us and move forward,' because they now felt part of an organization; part of a team. It would be great if that happened but part of this theory is that these should be transferable skills to any project of any size that we're looking to do."