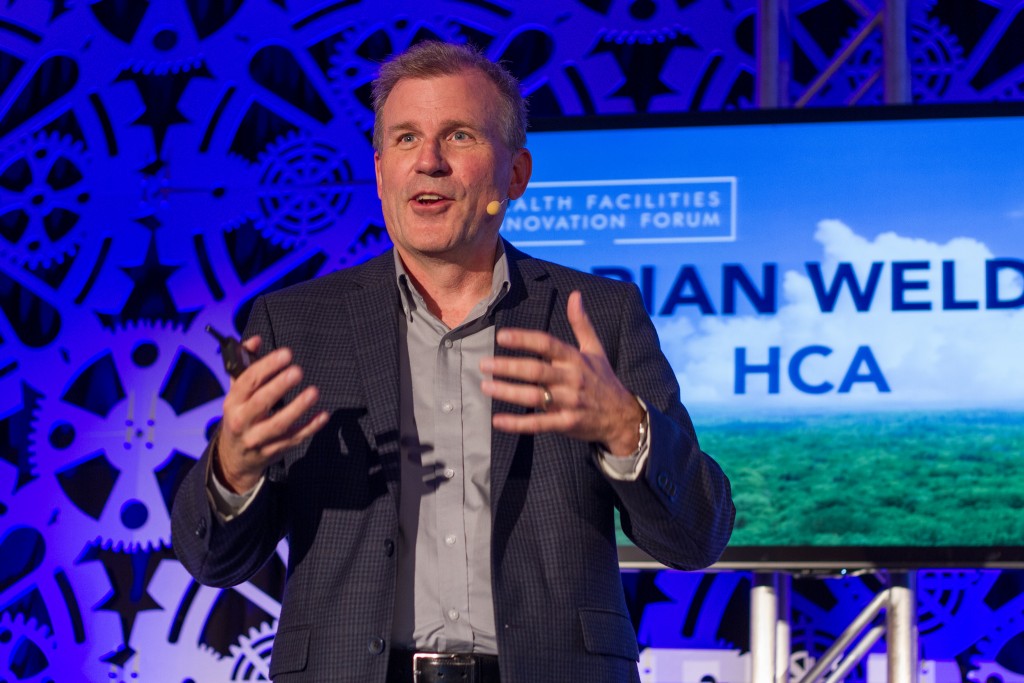 Comparing healthcare data storage to the solar system may seem like a bit of a stretch, but HCA’s Brian Weldy makes this analogy work.

While hospitals have begun the process of collecting extensive data on patient care and overall operations, the next step toward achieving maximum efficiency is figuring out how to best analyze the data they collect, a major challenge, says Weldy.

The VP of Engineering & Facilities Management for HCA shared his thoughts during an engaging talk on Intelligent Building Technology at the Health Facilities Innovation Forum. 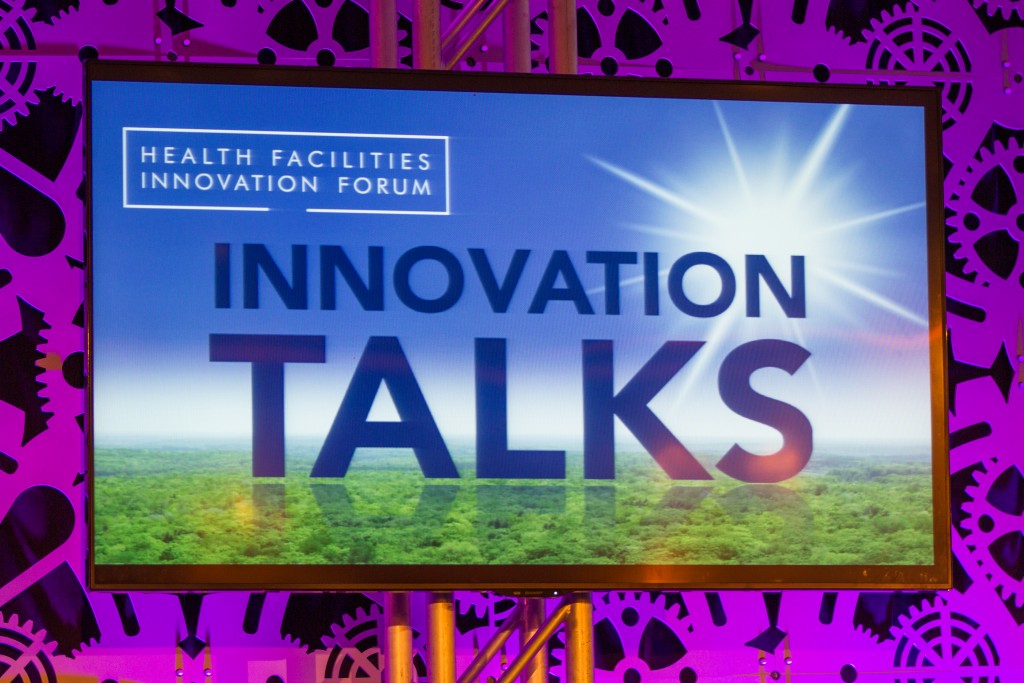 A Planet’s Worth of Data
For healthcare facilities execs, at this stage it takes a little imagination to see all the possibilities for optimizing buildings, says Weldy, drawing an analogy to the solar system.

Google has enough data stored to fill the sun, information stored in the Library of Congress could fill the moon, while HCA falls in between, with enough data on file to fill Neptune, the 3rd largest planet with a diameter of 29,297 miles, compared to the Earth’s 7,928 miles.

Right now, “hospitals are trying to get their minds wrapped around their own data,” he says, citing his employer as a prime example. “For all the information HCA has, we have a chief data scientist who is looking at how to analyze data and then put trends and studies to that.” 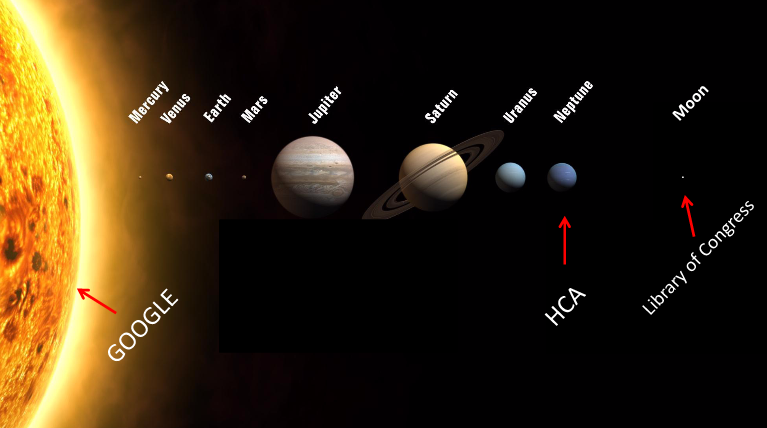 It’s Like an Airplane
Weldy compares the components of a smart building with flying an airplane, saying:

“I’m going to propose the idea of ‘flying a building.''

“First, the pilot is using the navigation system and all the systems that tie it together. That’s one aspect of data,” he says. “Second, (data is) coming out of the jet engine itself. This information shows how well the engine is performing, though it has nothing to do with flying an airplane.”

Weldy says he has spent time with the “head scientist from GE who analyzes jet engine data. We talked about this idea of how they get data on jet engines.”

One frequently used form of data collection involved “snapshot data,” which includes data pulled when the jet is taking off, climbing, cruising, descending and landing. Though this “snapshot” method pulls information at key points throughout the flight, it’s not comprehensive.

“Data is missed with this process alone,” he emphasizes. Beyond snapshot data there is more data that is also collected from the engines that is stored on the plane for future download for detailed analysis. A combination of all this data helps to provide clarity on what is really going on with the engine’s performance and operation.

Applying This Analogy to Hospitals
Weldy ties this analogy back into efficiently managing buildings, especially hospitals and other medical facilities. As with many aspects of life, finding the right balance between being overly conscientious and negligent is key.

“We can take this idea of a snapshot and apply it to a building. For buildings that use this ‘analytically based maintenance,”’ he explains.

“It means just doing the right amount of maintenance when you need to do that maintenance. If you think about that building as a jet engine, it’s bad if you undershoot – or overshoot – your maintenance.”

Weldy elaborated: “If you undershoot, you could end up spending more money later by not fixing it now and it could prove dangerous and malfunction. However, if you overshoot (by providing maintenance services too frequently) you not only spend more money but also face the risks associated with tearing equipment down more often.”

Structured & Unstructured Data
Weldy makes an important distinction between “structured” and “unstructured” data, emphasizing that at this point in time, many large organizations (like his) have collected copious amounts of information, desperately in need of analysis.

“Unstructured data is like reaching into a barrel of monkeys,” he says. “Getting data to make sense…is not an easy feat. The important part of big data is organizing it and figuring out what to do with it.” 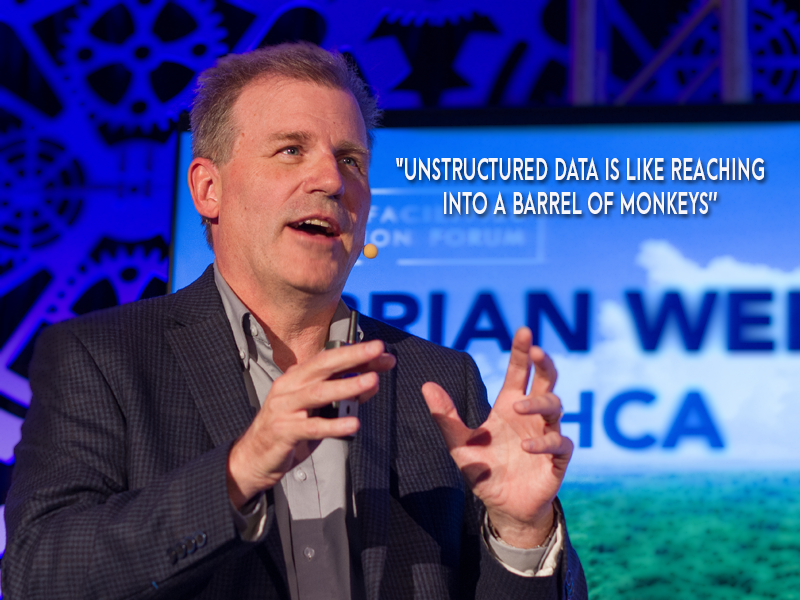 Early Days for Data Collection
Right now, we’re still in an area of uncertainty in collecting and analyzing data, he believes. “Costs need to come down for facilities to put data analytics into place, but I can assure you it’s coming together faster and faster all the time.”

“There will come a point when it will be pragmatic to go into a building, add hundreds of sensors, connect them and analyze data from that.”

Finding Focus
Weldy stressed the benefits of having data scientist look at the information businesses are collecting to “give it clarity and granularity,” Weldy says. “It’s like when an image is pixilated and gradually it becomes more obvious.”

“When you’re looking at the terrain ahead, are you looking at just the map or are you navigating yourself through the terrain that goes with it. It’s going to be some peaks and valleys and some lessons learned.”

“Are you ready for the train? It’s going to be a fun journey and enjoy your time,” Weldy concludes.

You can watch Weldy's full talk below.